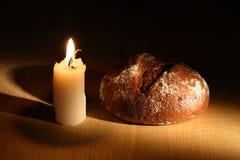 “You are the salt of the earth; but if salt has lost its taste, how can its saltiness be restored? It is no longer good for anything, but is thrown out and trampled under foot. 14 “You are the light of the world. A city built on a hill cannot be hid. 15 No one after lighting a lamp puts it under the bushel basket, but on the lampstand, and it gives light to all in the house. 16 In the same way, let your light shine before others, so that they may see your good works and give glory to your Father in heaven. 17 “Do not think that I have come to abolish the law or the prophets; I have come not to abolish but to fulfill. 18 For truly I tell you, until heaven and earth pass away, not one letter, not one stroke of a letter, will pass from the law until all is accomplished. 19 Therefore, whoever breaks one of the least of these commandments, and teaches others to do the same, will be called least in the kingdom of heaven; but whoever does them and teaches them will be called great in the kingdom of heaven. 20 For I tell you, unless your righteousness exceeds that of the scribes and Pharisees, you will never enter the kingdom of heaven.

Scripture quotations are from the New Revised Standard Version Bible, copyright 1989, Division of Christian Education of the National Council of the Churches of Christ in the United States of America. Used by permission. All rights reserved.

Are you ready for part 2 of the Sermon on the Mount? Last week Jesus taught his disciples that God blesses the weak, the poor, the vulnerable, those who’ve been wronged–those who no one else thinks are blessed. Today, Jesus tells his disciples who they are.

He begins this part by telling them that they are salt and light. These aren’t just random items, but are two things the culture was dependent upon for survival. Salt was a preservative for food, which made it invaluable, and light for safety and to be able to see what was coming in the dark. Remember there was no electricity, so no flipping a switch at night.

I’m guessing you aren’t buying that. Or, if you are, that you are attaching some conditions to it, like, I know some people are salt because they do things like help people stuck on the side of the road. Or there might be times when I’m a little flicker of a light, like when I visited my friend in the hospital.

That’s not what Jesus is saying at all. It’s not about what you do, it’s about who you are. You, right now, are the light of the world. Sometimes we cover it up, and Jesus agrees that we do that, but that doesn’t change the fact that you are who you are.

Think about this. Right now, the most divisive arena our country is political, right? Marches, protests, executive orders, and bans are all gearing up toward a long and difficult fight. As a congregation, we are pretty diverse politically. We are made up of some pretty hard-core Conservatives and some wildly progressive Liberals and everything in between. Yet every week we come together and pray for each other and love each other and forgive each other and listen to each other. Every week we join with the people around us at the table with Jesus, no matter how they voted, and share the unity of a Eucharistic meal. Every week we take someone’s hand, whether they are conservative or progressive, and support them in their prayers. You tell me, isn’t that what shining a light looks like? Aren’t we telling the world that there is a place, and that we are a community, that will love right through the barriers? That is the salt of the earth. That is a light that will brighten the world.

I think it might be a little easier to shine in here with each other. It’s when we leave here that we cover our light with a bushel. Suddenly, outside of this community, we find ourselves being judged for things that aren’t really about God. Things like production and competence and numbers and strength. It can be uncomfortable being salty when saltiness isn’t valued. It’s easier to cover up the light of who we are and accept other accolades based not on who we are, but solely on what we do. It’s in what we do that we get raises and promotions. What we accomplish gets us recognition and a good resume. Those things end up becoming our priority, rather than shining the light of love in which we are created.

Then we justify this by telling ourselves that faith is a private matter, between us and God. I’ll live my faith, I’ll just do it privately. I’ll follow Jesus, just not so anyone will notice. If I’m going to stand out, I want to stand out for things that get me somewhere, not for showing mercy to people who are really getting what they deserve. At least not all the time.

Except that Jesus says that our light is to be put on a lampstand for all to see. That’s pretty public. We say that at every baptism as we hand the newly baptized a lit candle, a reminder that they are the light of the world and ought to shine.

What it takes is you being you. Recognizing that the very core of your identity is actually God’s love and grace. That’s the image in which you were created in the first place. Be what you are. And be that in the world.

Think for a minute about a time you revealed compassion. A time you made a difference for someone who needed it. That’s your light! That’s you!

Now consider what would happen if you revealed that part of you at work, in your neighborhood, to the local or federal government.

Would you be rewarded? Get a promotion? Be able to retire sooner? Have an easier life? Probably not, truth be told. But the world would shine a little brighter. Because of you. You are the light of the world. Put your light on a lampstand and give glory to God! It’s who you are. It’s what the world needs.